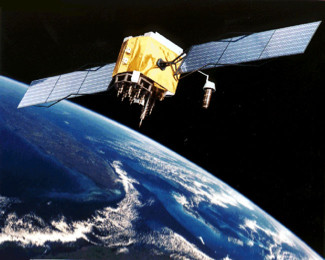 US Government admits satellite temperature readings “degraded.” All data taken offline in shock move. Global warming temperatures may be 10 to 15 degrees too high.

The fault was first detected after a tip off from an anonymous member of the public to climate skeptic blog, Climate Change Fraud (view original article) (August 9, 2010).

Caught in the center of the controversy is the beleaguered taxpayer funded National Oceanic and Atmospheric Administration (NOAA). NOAA’s Program Coordinator, Chuck Pistis has now confirmed that the fast spreading story on the respected climate skeptic blog is true.

However, NOAA spokesman, Program Coordinator, Chuck Pistis declined to state how long the fault might have gone undetected. Nor would the shaken spokesman engage in speculation as to the damage done to the credibility of a decade’s worth of temperature readings taken from the problematic ‘NOAA-16’ satellite.

‘NOAA-16’ was launched in September 2000, and is currently operational, in a sun-synchronous orbit, 849 km above the Earth, orbiting every 102 minutes providing automated data feed of surface temperatures which are fed into climate computer models.

NOAA has reported a succession of record warm temperatures in recent years based on such satellite readings but these may now all be undermined.

World-renowned Canadian climatologist, Dr. Timothy Ball, after casting his expert eye over the shocking findings concluded, “At best the entire incident indicates gross incompetence, at worst it indicates a deliberate attempt to create a temperature record that suits the political message of the day.”

Great Lakes users of the satellite service were the first to blow the whistle on the wildly distorted readings that showed a multitude of impossibly high temperatures. NOAA admits that the machine-generated readings are not continuously monitored so that absurdly high false temperatures could have become hidden amidst the bulk of automated readings.

In one example swiftly taken down by NOAA after my first article, readings for June and July 2010 for Lake Michigan showed crazy temperatures off the scale ranging in the low to mid hundreds - with some parts of the Wisconsin area apparently reaching 612 F. With an increasing number of further errors now coming to light the discredited NOAA removed the entire set from public view. But just removing them from sight is not the same as addressing the implications of this gross statistical debacle.

NOAA Whitewash Fails in One Day

NOAA’s Chuck Pistis went into whitewash mode on first hearing the story about the worst affected location, Egg Harbor, set by his instruments onto fast boil. On Tuesday morning Pistis loftily declared, “I looked in the archives and I find no image with that time stamp. Also we don't typically post completely cloudy images at all, let alone with temperatures. This image appears to be manufactured for someone's entertainment.”

But later that day Chuck and his calamitous colleagues now with egg on their faces, threw in the towel and owned up to the almighty gaffe. Pistis conceded,

“I just relooked and (sic) the image again AND IT IS in my archive. I do not know why the temperatures were so inaccurate (sic). It appears to have been a malfunction in the satellite. WE have posted thousands if (sic) images since the inauguration of our Coatwatch (sic) service in 1994. I have never seen one like this.”

But the spokesman for the Michigan Sea Grant Extension, a ‘Coastwatch’ partner with NOAA screening the offending data, then confessed that its hastily hidden web pages had, indeed, showed dozens of temperature recordings three or four times higher than seasonal norms. NOAA declined to make any comment as to whether such a glitch could have ramped up the averages for the entire northeastern United States by an average of 10-15 degrees Fahrenheit by going undetected over a longer time scale.

“We need to do a better job screening what is placed in the archive or posted. Coastwatch is completely automated so you can see how something like this could slip through.”

In his statement Pistis agreed NOAA’s satellite readings were “degraded” and the administration will have to “look more into this.” Indeed, visitors to the Michigan Sea Grant site now see the following official message:

"NOTICE: Due to degradation of a satellite sensor used by this mapping product, some images have exhibited extreme high and low surface temperatures. “Please disregard these images as anomalies. Future images will not include data from the degraded satellite and images caused by the faulty satellite sensor will be/have been removed from the image archive.”

Blame the Clouds, not us says NOAA

NOAA further explained that cloud cover could affect the satellite data making the readings prone to error. But Pistis failed to explain how much cloud is significant or at what point the readings become unusable for climatic modeling purposes.

As one disgruntled observer noted,

The serious implications of these findings was not lost on Dr. Ball who responded that such government numbers with unusually high or low ranges have been exploited for political purposes and are already in the record and have been used in stories across the mainstream media, which is a widely recognized goal.

The climatologist who advises the military on climate matters lamented such faulty data sets,

“invariably remain unadjusted. The failure to provide evidence of how often cloud top temperatures "very nearly" are the same as the water temperatures, is unacceptable. If the accuracy of the data is questionable it should not be used. I would suggest it is rare given my knowledge of inversions, especially over water.“

How Many other Weather Satellites Are Also ‘Degraded’?

A key issue the government administration declined to address was how many other satellites may also be degrading. ‘NOAA-16’ is not an old satellite - so why does it take a member of the public to uncover such gross failings?

Climate professor, Tim Ball, pointed out that he’s seen these systemic failures before and warns that the public should not expect to see any retraction or an end to the doom-saying climate forecasts:

“when McIntyre caught Hansen and NASA GISS with the wrong data in the US I never saw any adjustments to the world data that changes to the US record would create. The US record dominates the record, especially of the critical middle latitudes, and to change it so that it goes from having nine of the warmest years in the 1990s to four of them being in the 1930s, is a very significant change and must influence global averages.”

Each day that passes sees fresh discoveries of gross errors and omissions. One astute commenter on www.climatechangefraud.com noted, “it is generally understood that water heats up more slowly than land, and cools off more slowly. However, within the NOAA numbers we have identified at least two sets of data that run contrary to this known physical effect.

The canny commenter added, “two data points in question are at Charlevoix, where the temperature is listed at 43.5 degrees - while temperature nearby (+/- 30 miles) is 59.2 degrees; and in the bay on the east side of the peninsula from Leland is listed at 37.2 degrees. These are supposedly taken at 18:38 EDT (19:38 Central, or 7:38PM). These are both taken in areas that appear to be breaks in the cloud cover.

With NOAA’s failure to make further concise public statements on this sensational story it is left to public speculation and ‘citizen scientists’ to ascertain whether ten years or more of temperature data sets from satellites such as NOAA-16 are unreliable and worthless.

We definetely polute the environment way too much,

but I didn't know the Global Warming Scam to be such an old hat.


Special interiview with Lord Christopher Monckton about Al Gore's
climate gate hoax, and the hidden Nwo objective behind it all.

I want to add that, as he puts it in part 2, it is and was not only the communist governments that didn't care much about the health & safety of their peoples as we know by studying the history of the industrial revolution, so shifting the blame to only one side (his political opponents on the left) is not really fitting the bill from my perspective...yet I think that he does have quite an interesting point of view on the issue and it's looming future consequences.

I personally would say that the political right and left are both involved in playing out the NWO scheme (by playing hide and seek with the peoples) of which Lord Monckton is describing in this interview..